The great Achaemenid palace built on a quadrilateral platform including an area of 125,000 square meters. Based on Darius’s inscription, it is clear that there was no building in this place before.
The creation of this masterpiece is strange, for 500 BC. The design of this magnificent building consider as an adaptation of the architectural art of the Egyptians, Greeks, Assyrians and Babylonians. Of course, the spirit of Iranian art cannot be ignored in the construction of this magnificent work.

The conquests of the Achaemenid kings and their acquaintance with other lands had a great impact on the construction and design of Persepolis.
Large lime stones used in the construction of Persepolis. These stones are very strong and are connected with a staple (iron connector). Despite the strength of the columns and gates, wood and clay used on the roofs of palaces and walls. So, this is why the roof and walls burnt during Alexander the Great’s invasion. 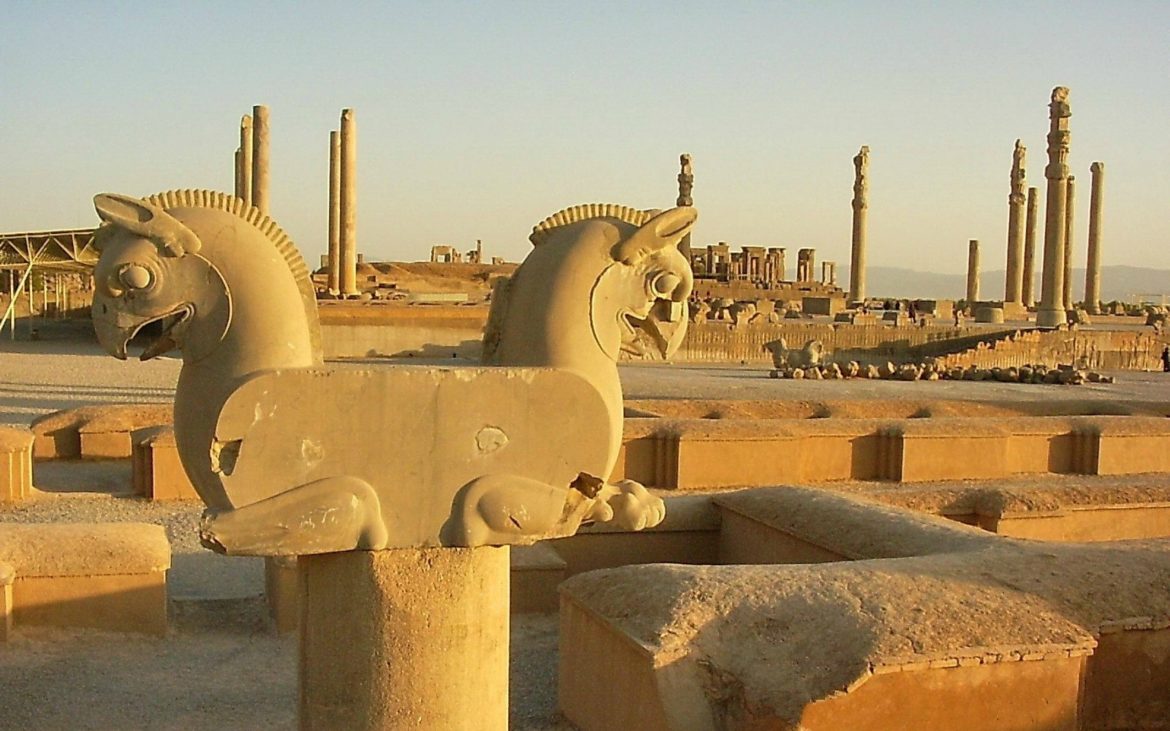 This Gate is located in the northwest Persepolis. The construction of this palace remained unfinished in the time of Darius but Xerxes completed it. The Gate of All Nations is also called the waiting room. According to the inscriptions on top of the palace, representatives of various nations first entered this area and waited there with hands full of gifts until getting permission from the head of Ceremonies. Afterwards, they entered the Apadana Palace from the south door to present their gifts.
The Palace of All Nations had 4 columns, of which three columns are now left, as well as this hall had three gates: west, east and south. Abstract statues such as large cows or winged cows with human heads are the unique decorations of this palace. 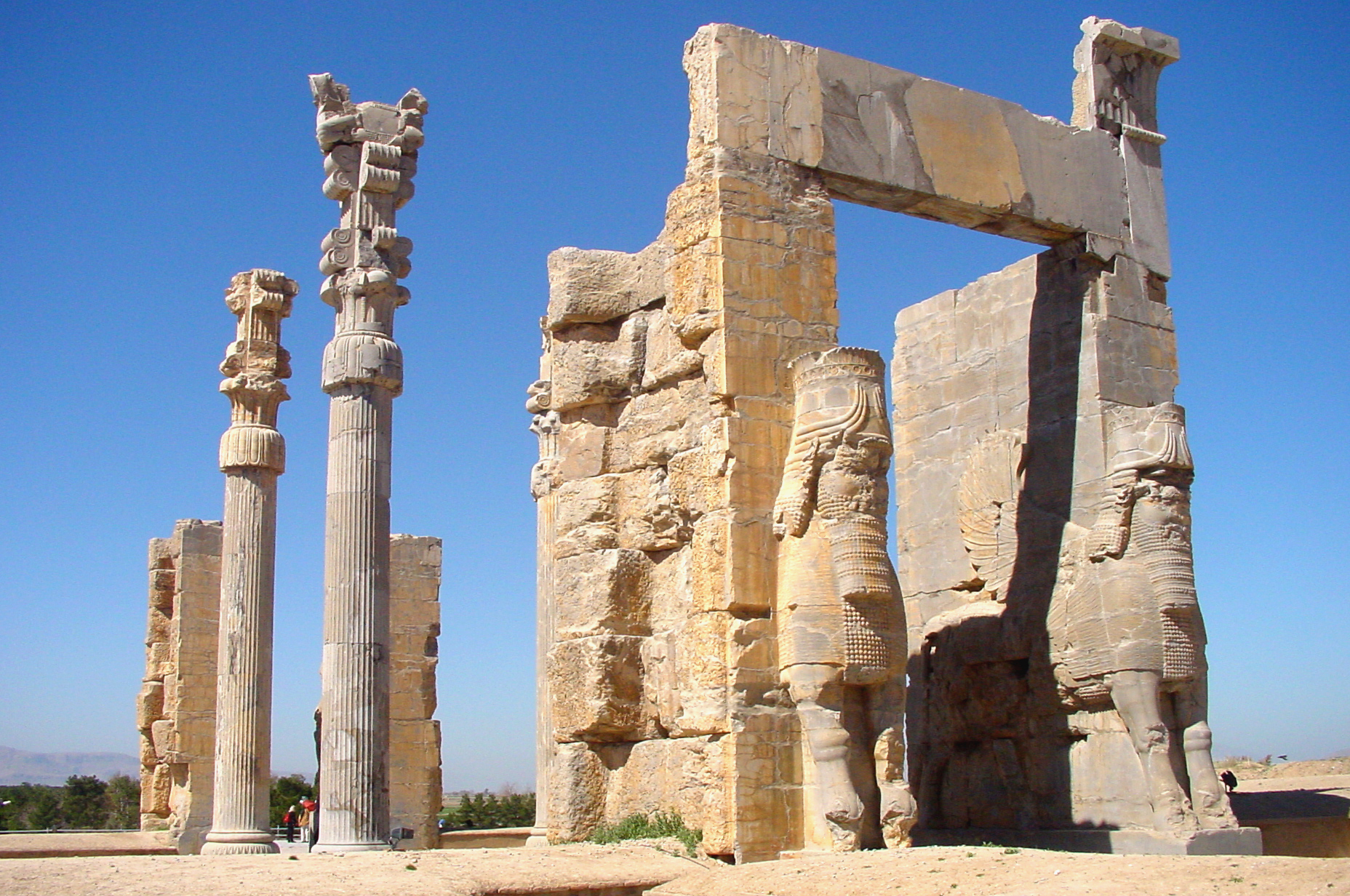 This is the oldest palace of the complex that Darius the Great built it. Also this Palace was a place for the acceptance of different countries’ representatives. This means that the ambassadors of different nations entered the palace with special gifts to meet the king of Iran and present their gifts to him.
Apadana palace has 72 columns of which only 14 pillars have left. The head of the columns in this palace  decorated with two-headed cows. The high roof of this palace is 20 meters and its vastness shows it could accommodate 10,000 guests.
This palace has two steps located in the eastern and northern part of the palace. The walls of the stairs are decorated with relief and inscriptions that show the usage of the palace well. These reliefs show the representatives of 23 countries who are humbly queuing to present their gifts to the Achaemenid king. 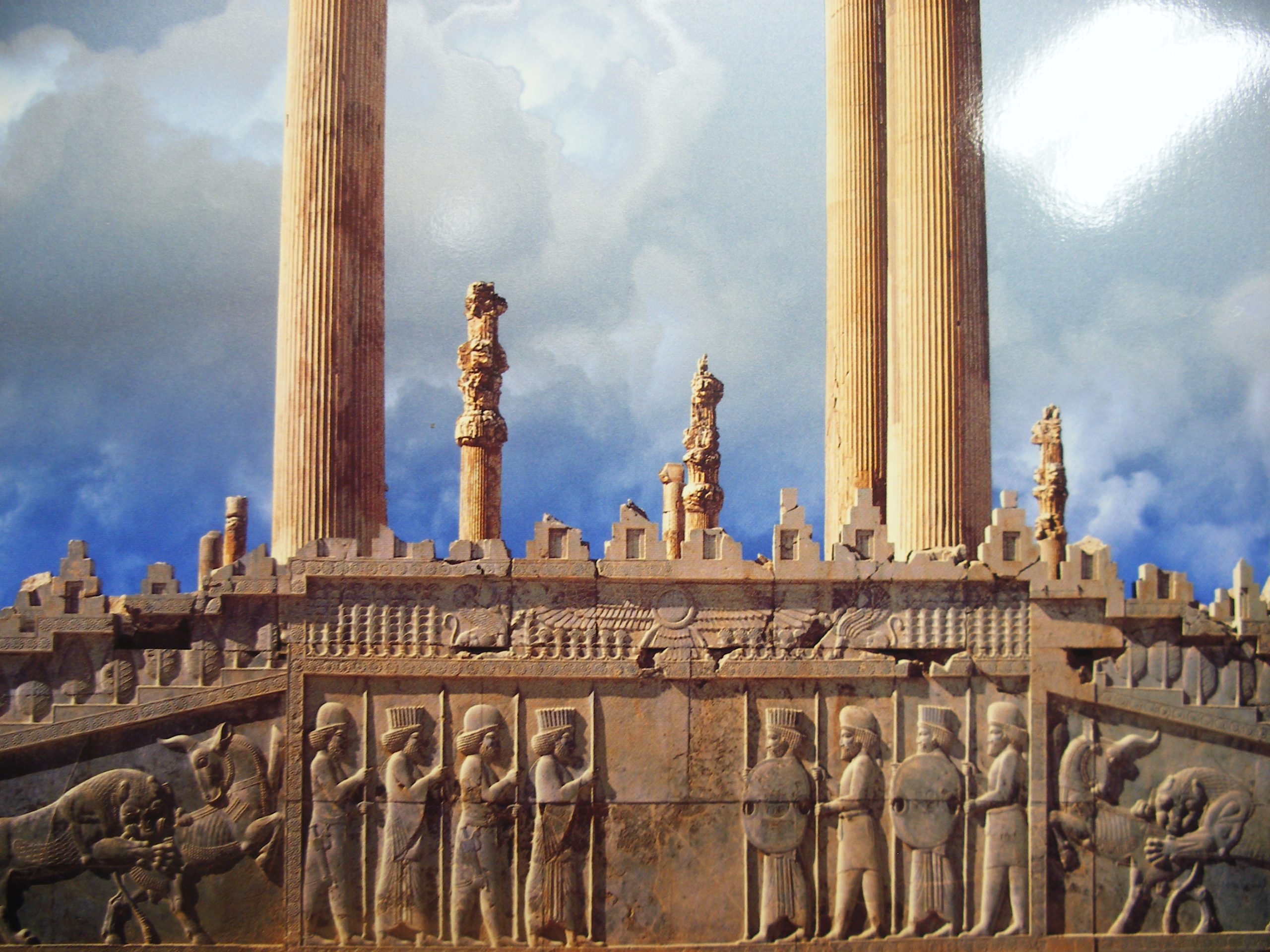 In fact, this palace was the winter palace of Darius the Great. Thatcher Palace is about one thousand square meters with a central room and 12 columns. Tachar is also called the Hall of Mirrors and that’s because of the polished gray stones in which the image of people was reflected. There are various reliefs on the walls of the Tachar stairs. 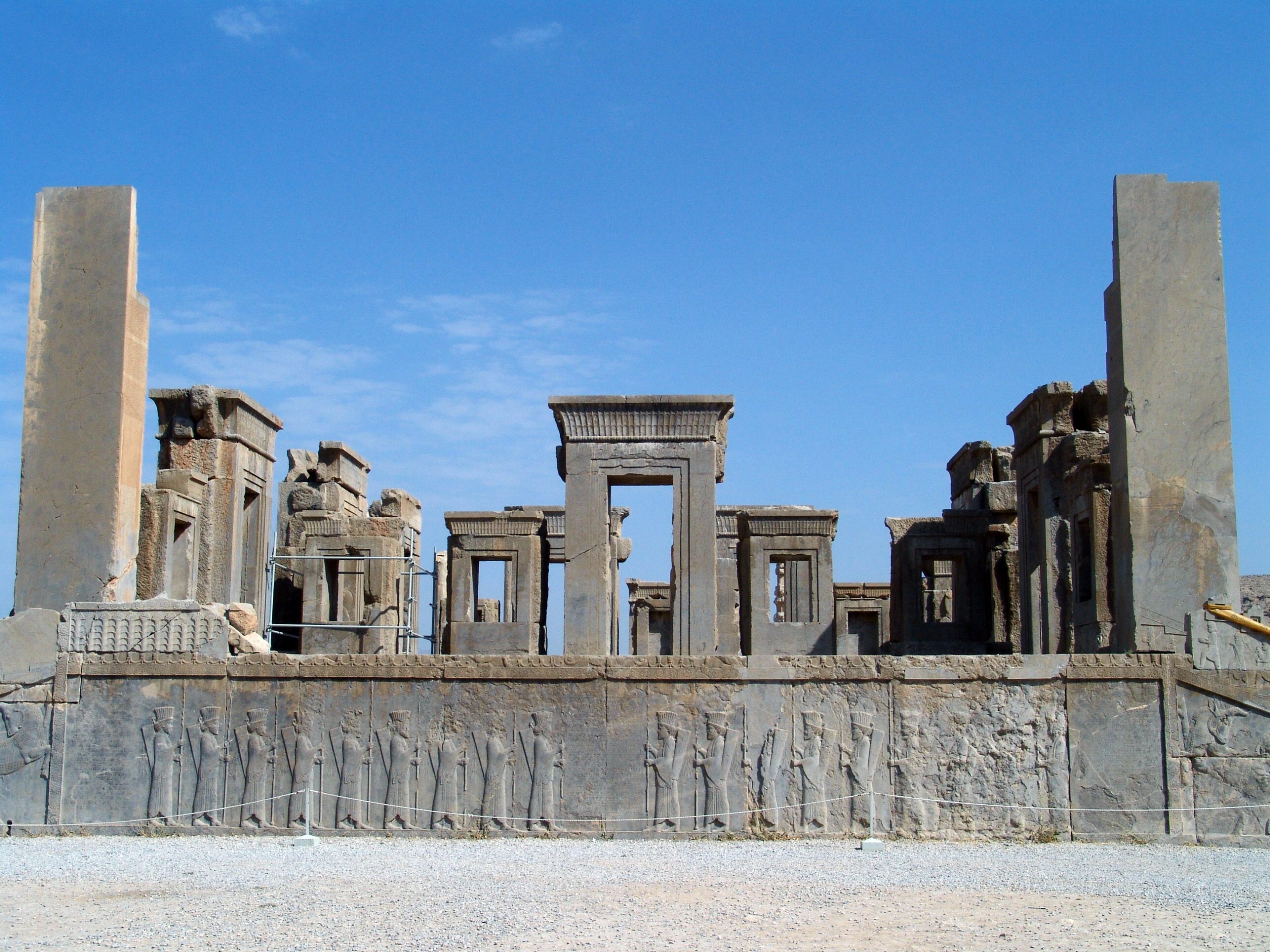 The reliefs, head columns of humans and the name of the palace show that this palace was for consultation and contemplation with the elders and ministers. This palace has access to other palaces with its three doors and several corridors. Construction of the Council Hall began during the reign of Darius the Great and completed during the reign of Ardashir I. The reliefs on the walls of the stairs include Persian grandees who have intimate and friendly faces; it seems they are going to meet the king for consultation.

It was the private palace of Xerxes the Great which has borrowed its name from his wife “Hadish”. After Alexander’s invasion, this palace fully destroyed so that not much information is available about this palace. No doubt this desolation caused by the Athenians’ distaste of Xerxes for setting Athens on fire. Hadish Palace was a small palace with 36 columns and had a way to the Queen’s Palace. 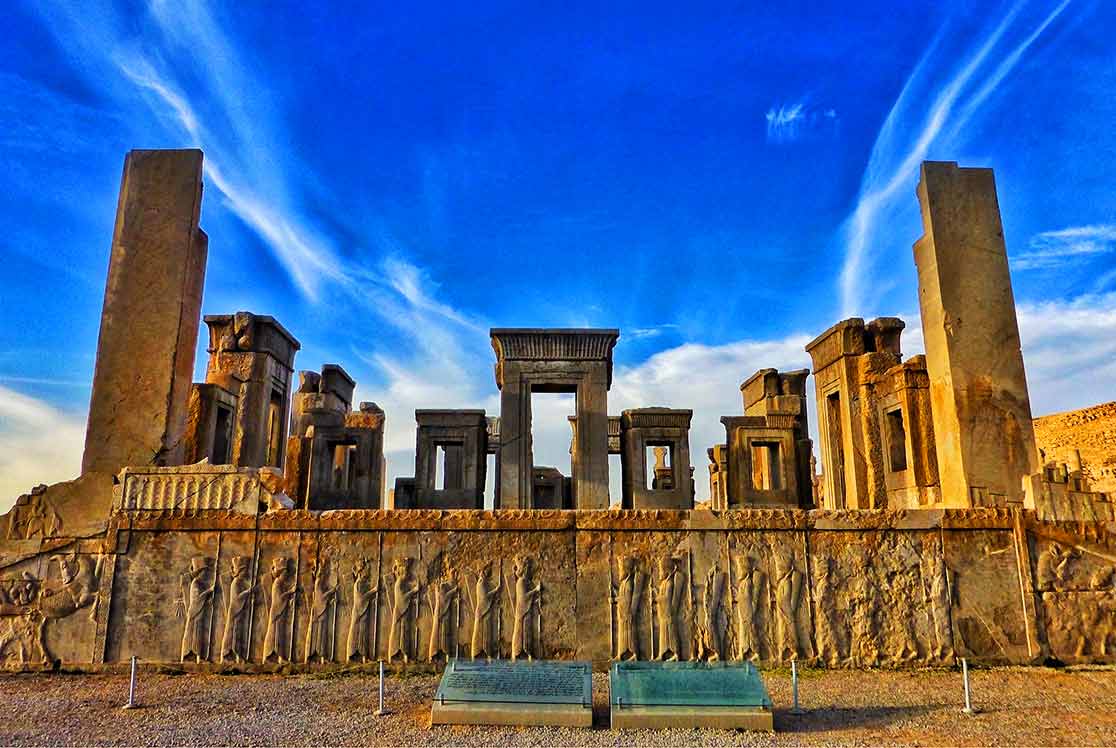 This palace is located next to Hadish Palace. The Queen’s Palace had several rooms as well as several private courtyards; reliefs of the kings entering with their servants and the king’s battle with the monsters can be seen in this palace. The palace now serves as a museum and includes a porch, two galleries and a hall. 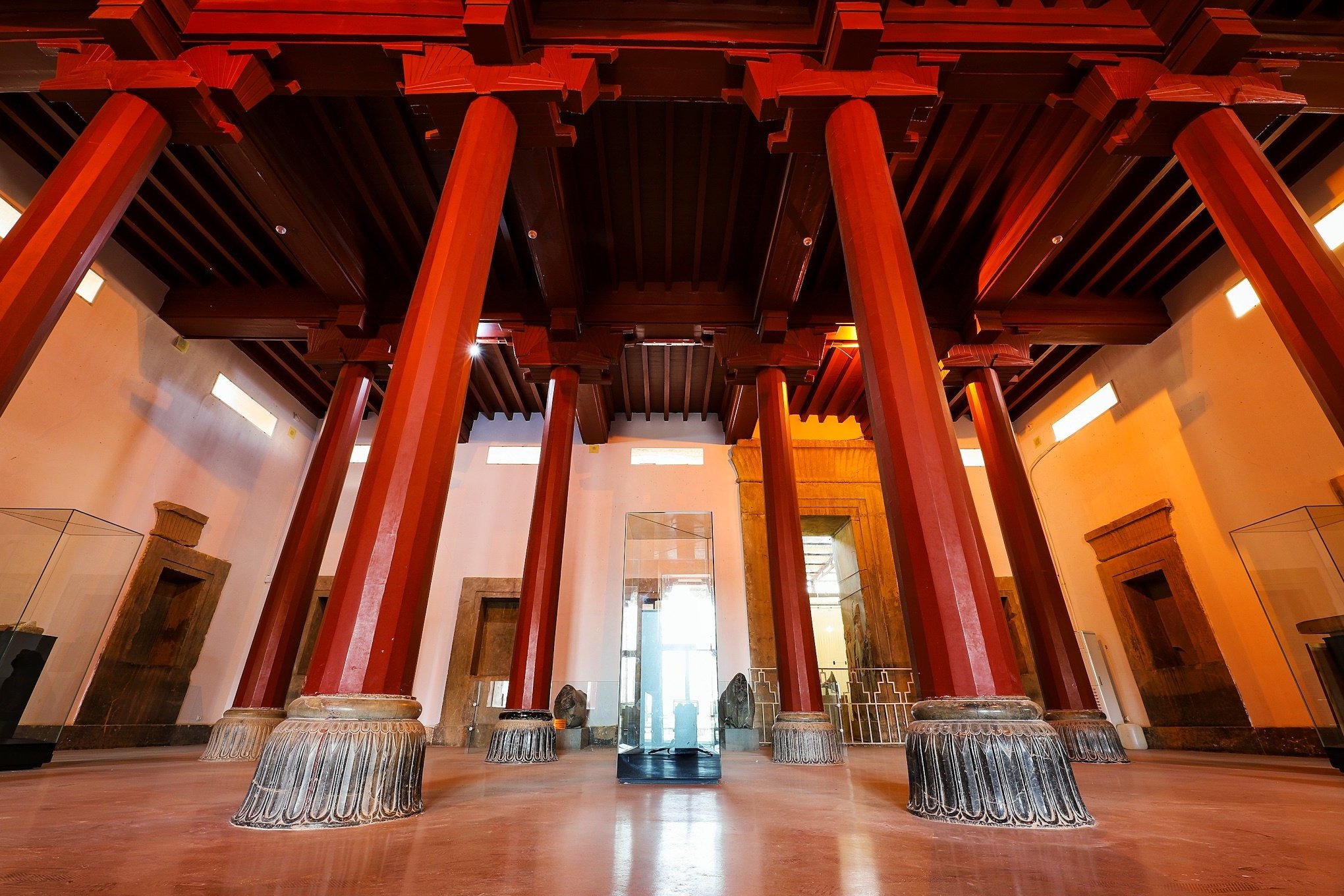 The Hundred columns Hall is also an unfinished palace and has an area of about 5,000 meters. According to the remains of this palace, the height of the columns was 13 meters and the building had 7 windows and 36 ledges. In front of the palace there is a porch with 36 columns. The central hall of the palace is made in a square shape and has 2 doors on each side and a total of 8 doors. Some archaeologists consider the use of this palace as a warehouse, and some reject this idea due to the special decorations of this palace. 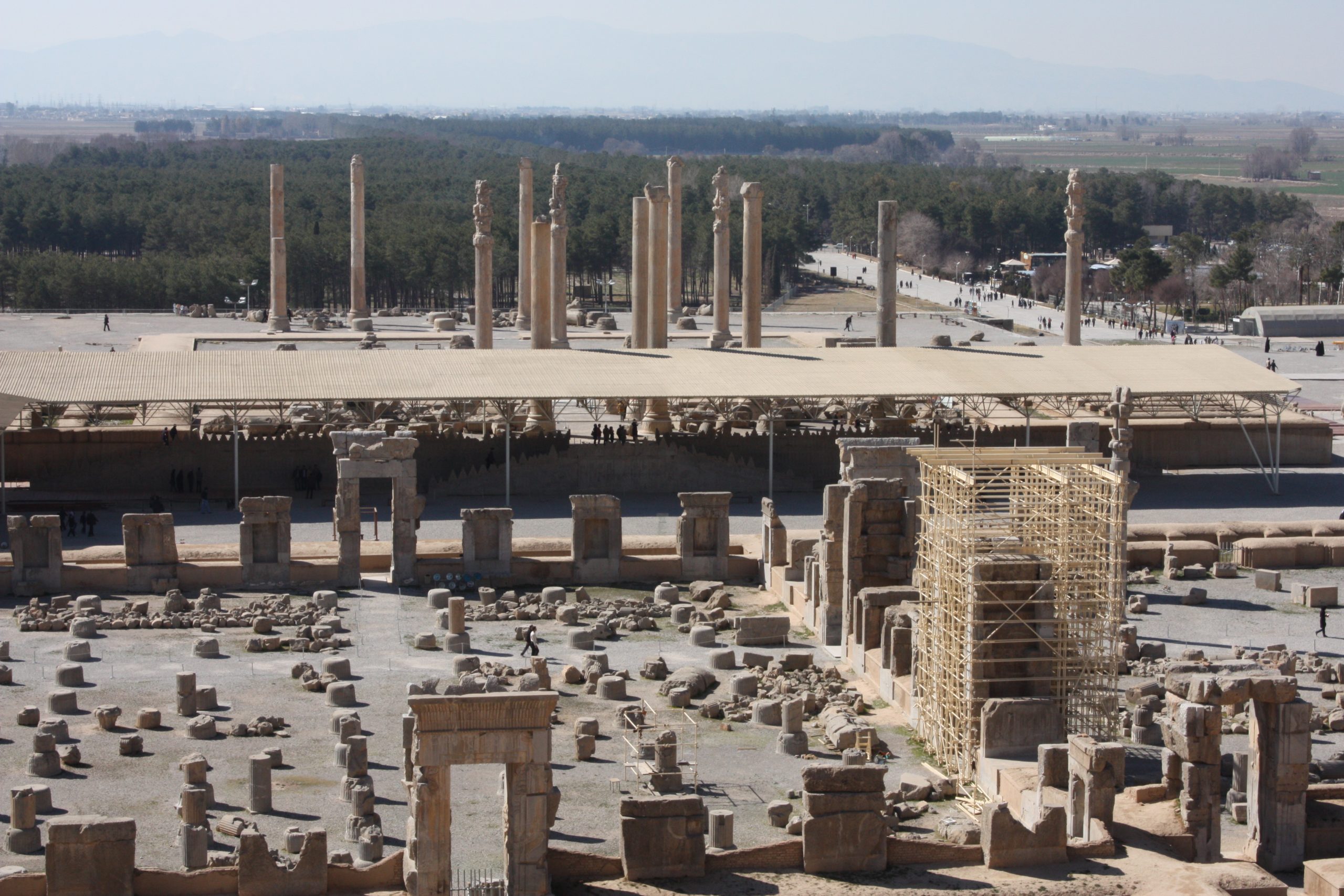 The Royal treasury is located in the eastern part of the Queen’s Palace. It has strong and thick walls and consists of two halls; one with 99 columns and one with 100 columns, several rooms and two backyards. It served as a collection of gold and silver jewelry, gifts from various countries, vessels, statues, royal seals, clay tablets, etc. The Athenians looted many of these jewels and precious objects after Alexander’s invasion.

Besides the glory and grandeur of Persepolis, let’s talk about the unique wonders of Persepolis. Even now, with all the scientific advances in architecture, Persepolis still looks like a strange structure.

More than 3,000 small clay tablets discovered in the royal treasury. Palm-sized tablets with special and interesting content; including workers’ wages. These tablets show that in 500 BC, the workers who participated in the construction of this construction had defined wages. In addition, men and women had equal rights. 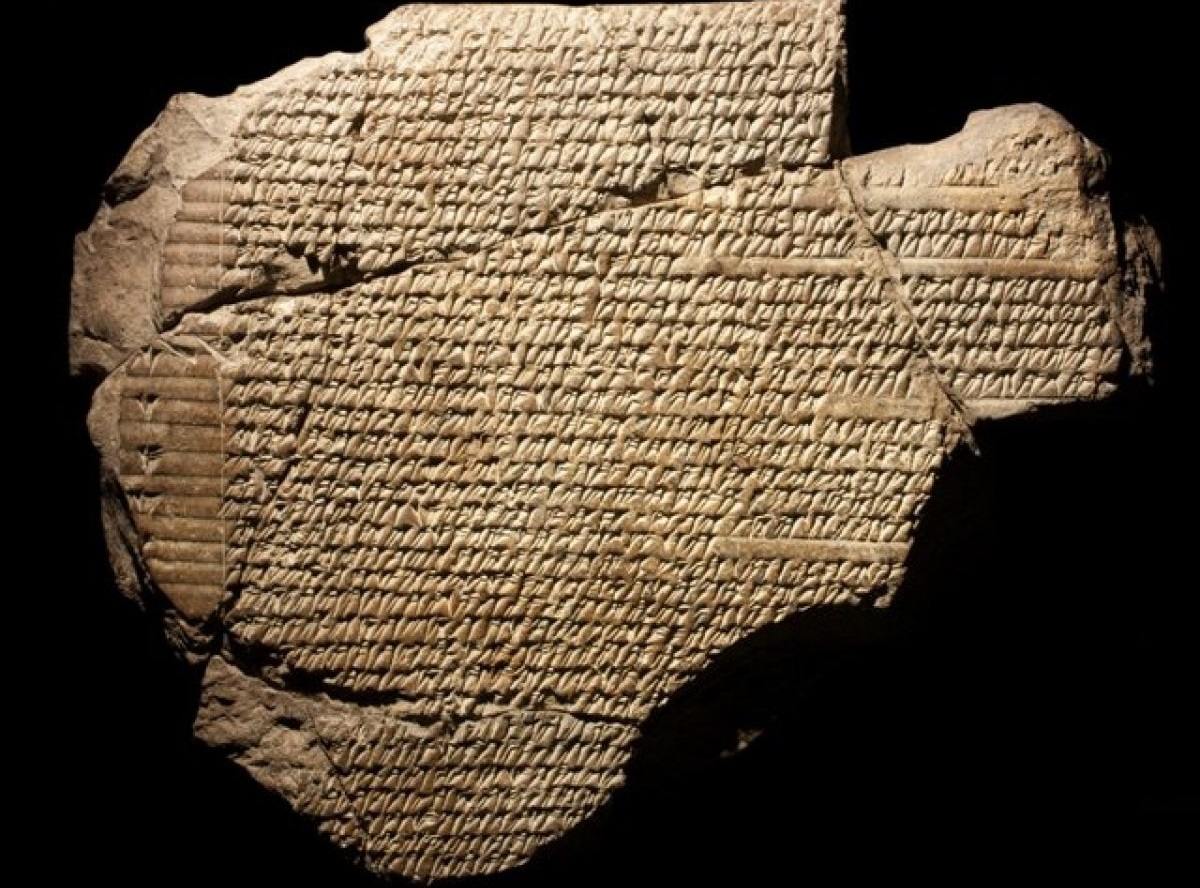 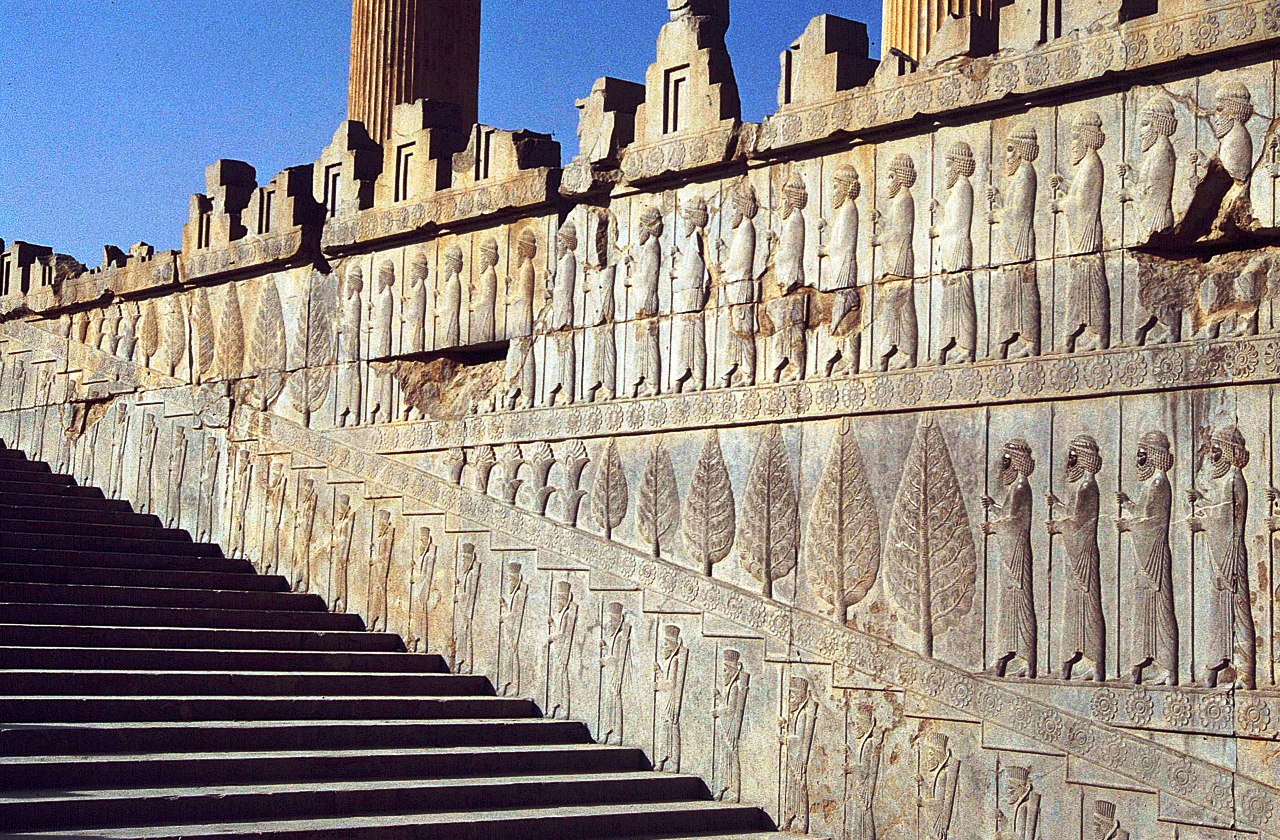 More than 3,000 reliefs and statues discovered in this complex; but there is no scene of war, bloodshed, line of slaves on them. It shows that the Achaemenid kings believed in peace, friendship and ethnic unity.

This is another wonder of Persepolis that is not visible. In fact, these canals are the sewage systems that are more than 2 km long and about 5-6 meters deep. Archaeologists are still exploring these underground canals.

Another wonderful characteristic of Persepolis is its symmetrical entrance stairs. You will not feel tired at all while climbing these stairs, since the height of the stairs are low. In the construction of this staircase, the ancient people used large and one-piece stones. Also, no kind of cement had been used; only iron connectors. 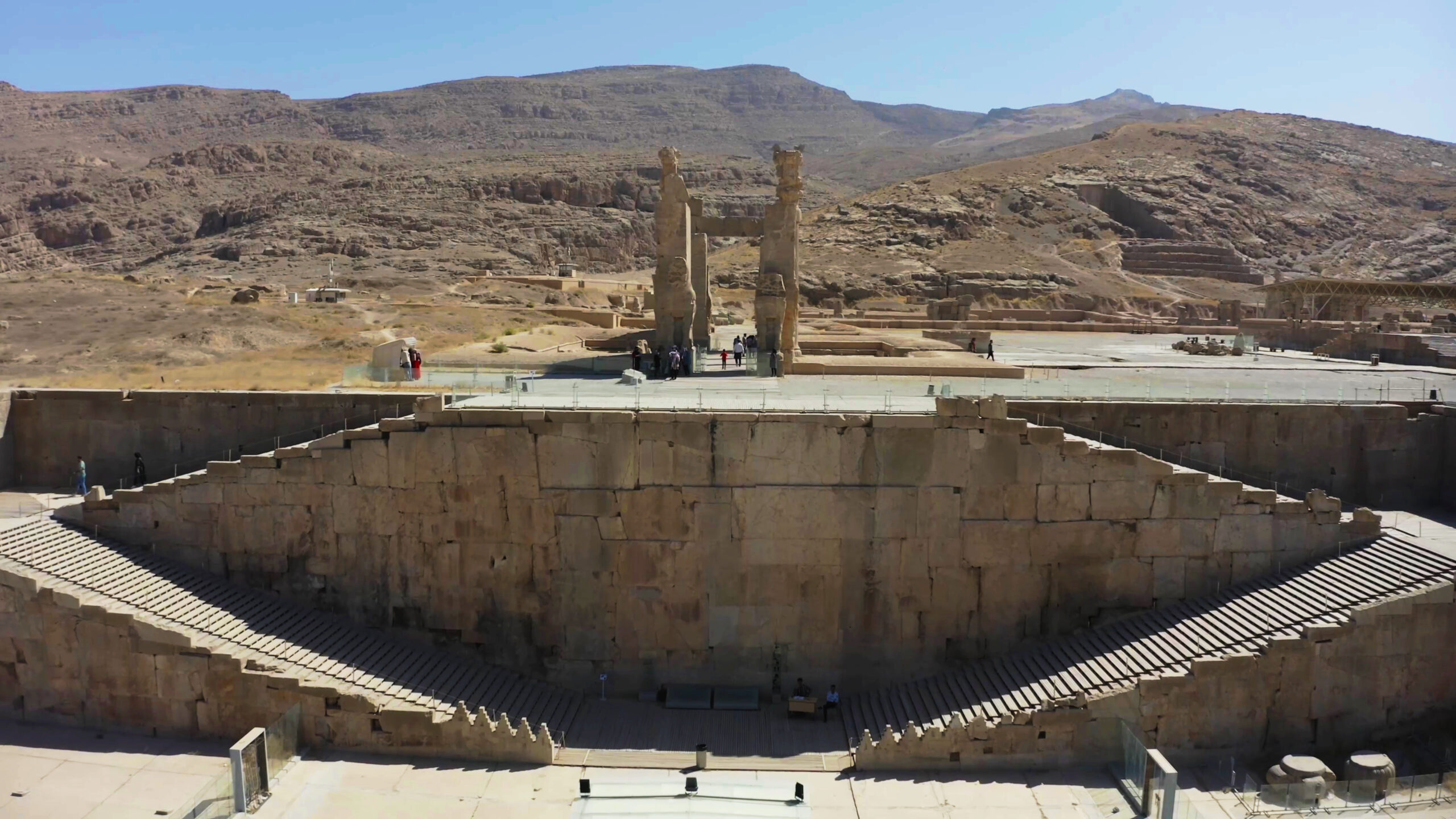 The design of this construction is unique in terms of earthquake resistance for that time. Its foundation is about 3 meters and has an independent foundation.

The architects’ scheme had preserved this complex from the dangers of floods. Brick gutters, stone wells, open canals have been some of the methods that have protected Persepolis against flood.

Silver and gold tablets under the palace of Apadana

Darius the Great ordered four gold and silver tablets and some coins under the foundation of Apadana Palace in order to convey his message to the future people. 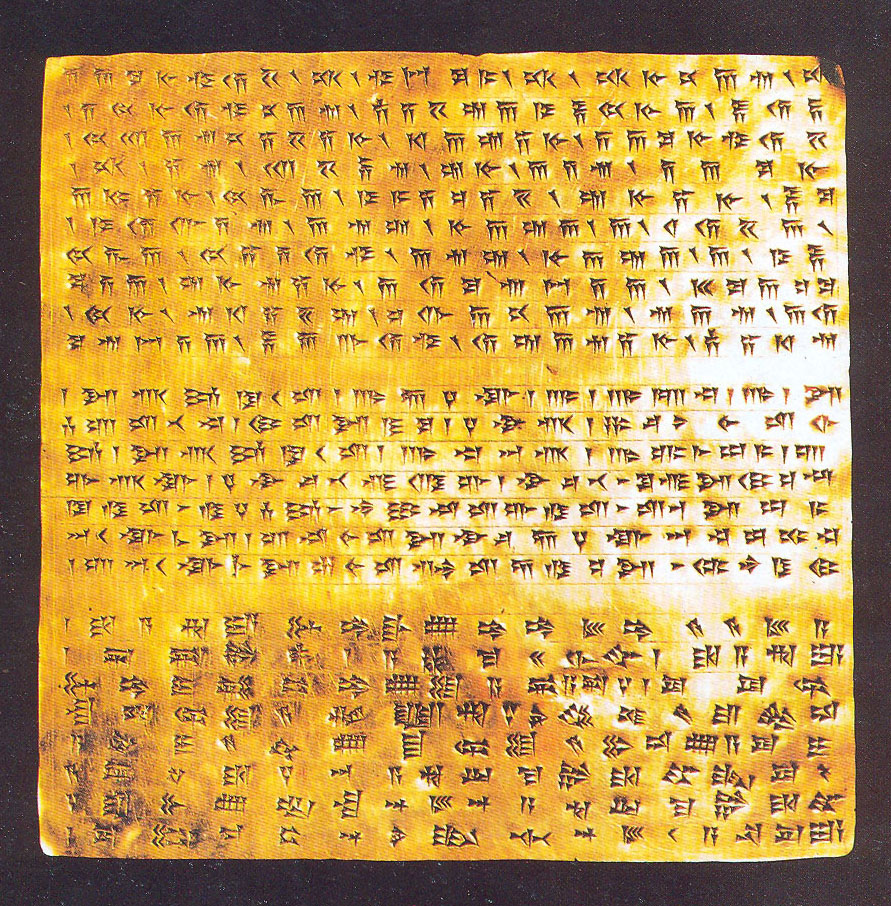 Persepolis (Takht-e Jamshid) is located in Fars province, southern Iran, near the beautiful city of Shiraz. Its location is 63 km from Shiraz.