The Louvre museum possesses many Iranian masterpieces that allow you to admire the history of this country.

A few years after the Great French Revolution, in 1793, the government established this museum under the name “Central Museum of Art”. In the beginning, the antiquities section of the museum consisted of a few figures from the classical era of Greco-Roman art and architecture.

During the reign of Nasser al-Din Shah, the fourth king of Qajar dynasty, a French archeological delegation headed by Marcel-Auguste Dieulafoy came to Iran to obtain permission to dig in the ancient areas of Iran. After the approval of the king, this group was able to obtain the desired privilege. Thus, the process of transferring the works of Iranian civilization abroad was apparently legalized.

Another French archeological delegation headed by Jean-Jacques de Morgan continued these excavations in Susa. He transferred his most famous findings to the Louvre Museum. Another discovery that took place in the Susa region belongs to another archaeologist from France. Ronald De Mecquenem expanded the scope of his studies in the region.

A little later, Roman Ghirshman executed the excavations of the royal city of “Untash-Napirisha”, later known as “Choghazanbil” due to its huge ziggurat. He transferred half of the findings to the Louvre Museum according to the agreement between the governments of Iran and France.  Another person who was able to collect antique collections in Iran was a diplomat, named Keyword. During his mission in Iran, he bought and collected valuable and brilliant examples of “Lorestan’s women” and sold his collection to the Louvre Museum in 1958.

In this article, we are going to introduce some of the prominents which are familiar to the culture and history lovers.

Before De Morgan’s discoveries, only little information was available about the Elamite civilization. But the excavations of French archaeologists were stunning. After that, the civilization of Elamite revealed its secrets and the presentation of its history and civilization became possible. 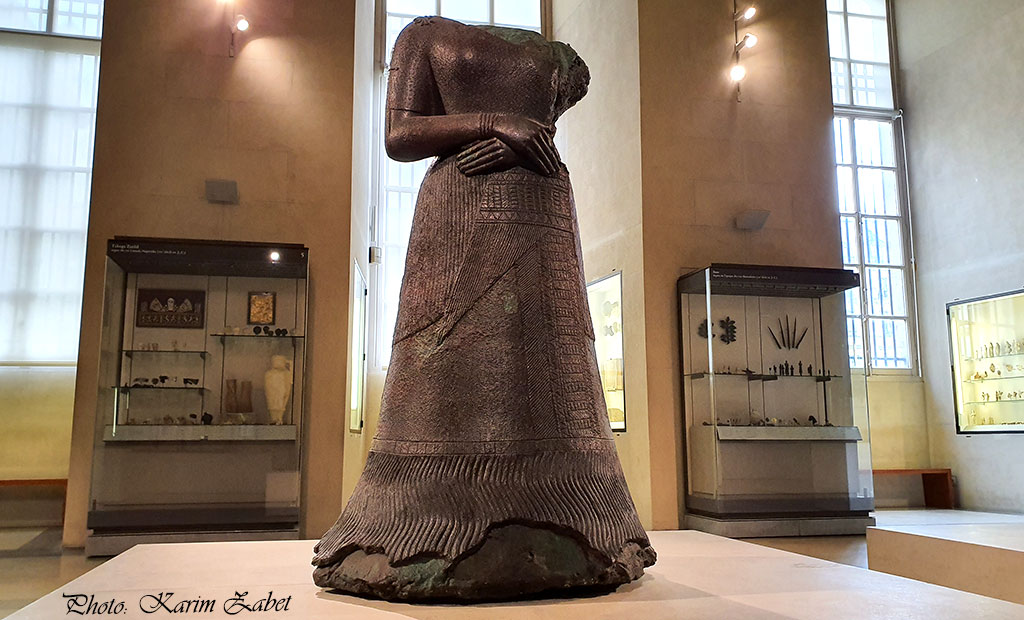 One of the most important findings of these excavations is the statue of Queen Napirasu belonging to 1300 to 1340 BC. The height of this 3,300-year-old standing bronze statue is 129cm and weighs 1,750 kg.

This work depicts the figure of Queen Napirasu, the wife of Ontash Gal, the great king of Elam. The body is made in natural size, but it’s head and left arm are damaged. The Elamite king’s wife wore a short-sleeved shirt with a long skirt covering her body.

Her dress is embroidered and decorated with tapestry. The queen has four bracelets on her right wrist and a ring on her left ring finger. The hands are folded in respect and dignity.

We can see an inscription on the edge of her skirt in Elamite language. The artist has engraved the name of the queen and her royal titles and asked the Gods to protect it and explained the religious services dedicated to them. At the end, there is a curse letter in which he asks the Gods to punish anyone who harms it.

The amount of metal used in this work is 1750 kg, which represents the wealth and economic prosperity of the middle Elam kingdom. The outer covering of the statue should normally have been plated with gold and silver, which has been lost.

All these books are the original manuscripts in which you can see the paintings of famous  Sassanids kings such as Khosrow Anushirvan and the legendary kings, like Faramarz and Salomon.

A 4,200-year-old stone tablet with relief from the victory of Naram Sin, grandson of Sargon of Akkad, is another work discovered by the Frenchman Jean Jacques De Morgan. This tablet shows Naramsin with a tall stature and  a horned helmet (as a sign of his divine position). Also, there is a bow and arrow in his hand on the top and left side of the stele. He pays homage to the Sun God, Shamash, who chose him and helped him in his victory.

Naramsin has placed his feet on the bodies of two defeated enemy soldiers (Lulubi tribe). Meanwhile, one of the enemy soldiers is dying with an arrow that split his neck.

The soldiers of the Shah, shown in eight figures, are holding spears and raising their flags as a sign of victory.  The front part of the scene shows Zagros Mountain and the king, leading his victorious army down the slope of the mountain. Above, two stars are shining as a sign of their Gods.

According to the inscription, the later King of Elam took this inscription to Susa, as the war booty. That is, the place where De Morgan discovered it, in 1898 AD.

The Portrait of Fath Ali Shah, the second king of the Qajar dynasty, is another masterpiece of the Louvre museum. Mehr Ali, the painter of the Qajar era, drew it in the first quarter of the 19th century AD. He used the technique of oil on canvas. The portrait is 240.7 cm high and 145 cm wide.

The Achaemenid masterpieces of Apadana palace

In the Louvre museum, you will visit a great hall in which there are many discoveries of Achaemenid civilization.  De Morgan has found them in Apadana palace, Susa. Darius the Great founded it as his winter palace in 488 BC.

The most important ones are a polychrome Brick panel of Siliceous ceramic with glaze which is 475 cm high and 375 cm wide, a gold bracelet with lion head decoration containing inlaid   turquoise, and a stone column with the bulls heads.

Shiraz carpet, woven of wool and silk, manufactured in Shiraz, belongs to the 10th century AD.  It has a blue background, pink decoration, and red border. It is 620 cm high and 455 cm wide.

One of the most valuable works of Iran in the Louvre Museum is the Marlik Gold Cup. This cup, discovered near Rudbar, Gilan province, belongs to the 12th to 14th century BC.  It  is 11 cm height and 11 cm wide.

The discovery of these unique golden cups led archaeologists to the conclusion that in the first millennium BC, nobles with a rich culture and art, lived in these areas (Gilan and Mazandaran).

The Marlik cup, made of electrum (an alloy of gold and silver), with engraved decorations, has its roots in ancient Iranian mythology. In these decorations, repeated in the circulation of the cup, you see a two-headed dragon that kills a gazelle with its jaws. 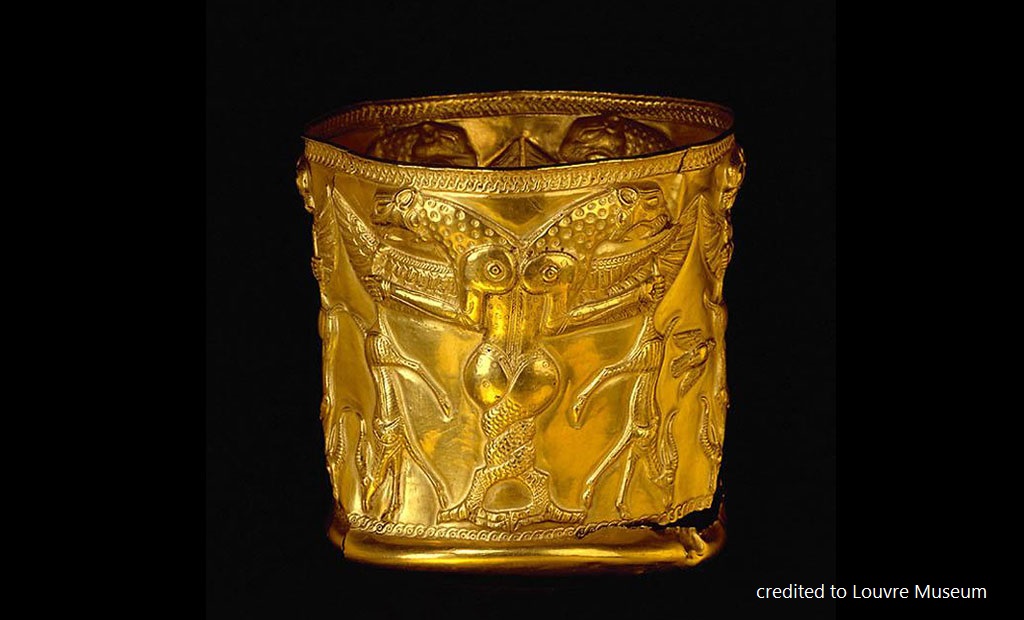