Eram garden, known as Paradise, is a unique and beautiful garden in Shiraz. It is also one of the UNESCO Persian gardens dating back to more than 1100 years ago.
While traveling to Iran, this fantastic garden attracts many people due to its nice atmosphere and scenic views. It’s famous for its amazing buildings, tall cypress trees, various plant species, the pool and fountains. Eram garden is the major touristic site of Shiraz, especially during spring, because of the smell of sour oranges in the air. 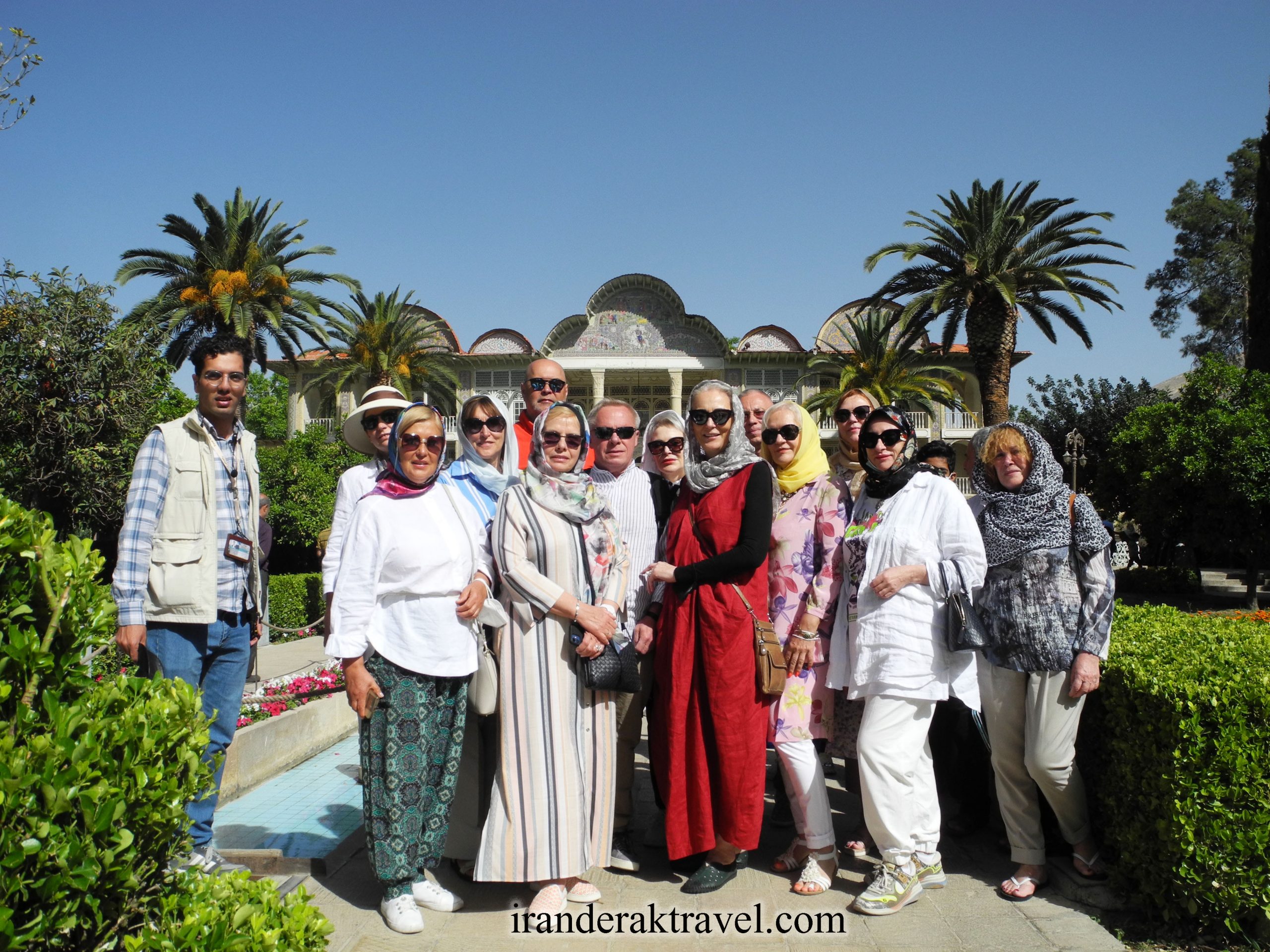 No one knows the exact date of its construction, but some evidence shows that the garden’s construction dates back to the Seljuk period. There is a belief that the tombs of some elders of the Qashqai tribe, who previously owned Eram garden, are located there. However, today there is no trace of these tombs.
The garden’s mansion was built during the reign of Fath Ali Shah, the 2nd king of the Qajar dynasty. It also attracted many people during the reign of Nasser al-Din Shah, the 4th king of this dynasty. In that era, a person named Haj Nasir al-Mulk Shirazi bought the garden from the Ilkahn Qashqayi family and built the present building of Eram Garden , although it’s been said that the constructors preserved the foundation of the old building.
Haj Nasir al-Mulk died in 1891 AD. Therefore, his son, Abu al-Qasem Khan Nasir al-Mulk, finished the remaining work of his father. 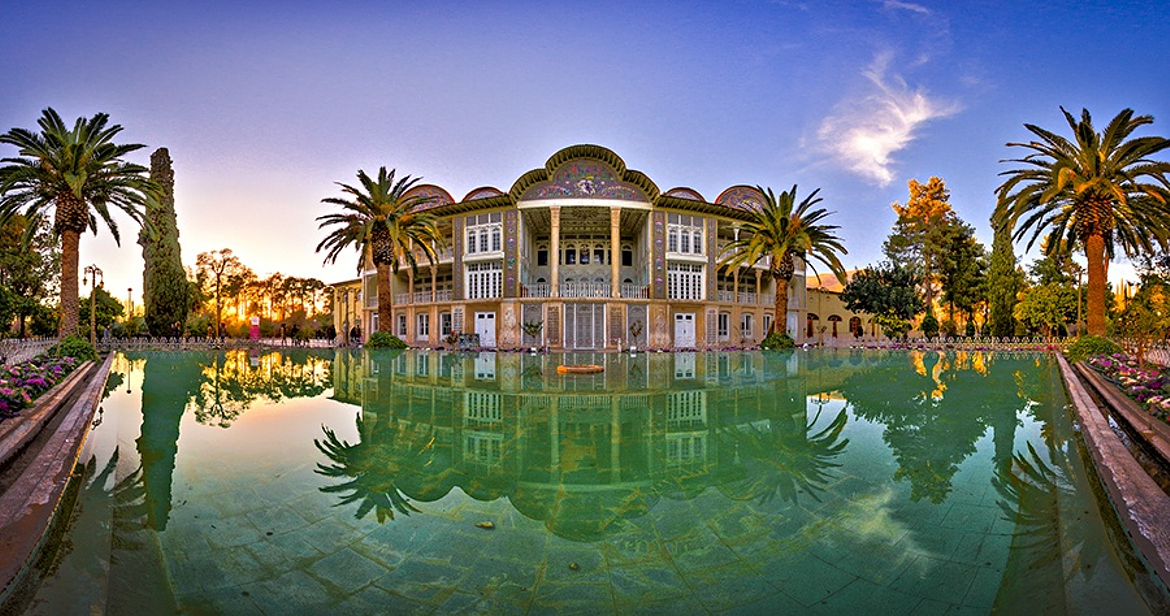 The main building of Eram Garden is a good and complete example of Qajar architecture. It was built during the reign of Nasser al-Din Shah, the 4th Qajar king, containing all the architectural features of this period. Its style is the same of the Safavid and Zand dynasties. A three-storey building with a gabled roof and a porch between two stone pillars at the front.
The entrance of the mansion, located in the east, is the masterpiece of the Qajar dynasty including various artistic works of that period; such as beautiful paintings, amazing carvings, majestic plastering and tiling.
On the second and third floors of the building, there is a beautiful porch with two carved stone pillars on each side.

On top of the columns, there is a picture of carved men wearing the clothes of Qajar era. These men and the entourage flowers and bushes are in a symmetrical position. Among the buildings of Shiraz belonging to the Qajar period, this two-column porch has a special importance due to its unique decorations and its beautiful plastering.

Currently, the area of Eram Garden is about 110380 square meters. The slope of the land in the garden is from west to east and the inner mansion is located in the west. Due to the high slope, the constructors have built some stairs in some parts of the garden that have increased its beauty and glory.
In front of the main building, there is a large pool in which you can see the image of the building.  Also, there are  four large Phoenix palm trees on its four sides. It gives the garden a nice view.
The area of Eram Garden’s pool is 335 square meters and 13 large integrated stones have formed its environment. These stones probably belong to the Jani Khan Ilkhani era. It seems that this pool was deeper in the past, but after reconstruction, its depth has been reduced to half a meter.

During the reconstruction, they used white tiles for the floor and the walls of the pool. The water that flowed in this pool had branched from the Grand Creek. This water, after entering the pool, spreads in the streams around the pool, and then flows into the creeks of the garden.
The whole parts of the garden is completely symmetrical, even the number of palm and cypress trees around the mansion and the pond. on the other hand, there are many old cypress trees and some of them have more than 30 meters height which are also famous as Sarv-e Naz.

Different plant species of Eram garden divide into two categories: Fruit trees and fruitless trees. The fruitless trees are cypress, purple, willow, maple, pine, blackberry, spruce, burdock, eucalyptus and poplar. Fruit trees in the garden are orange, pomegranate, azalea, persimmon, walnut, almond, apple, apricot, pear and beech.
Among all, the pomegranate trees are in the first rank and oranges ain the second rank. Citrus trees in this garden are as old as the other ones of Shiraz. Likewise, the cedars are more magnificent and more beautiful than the ones in other places of Shiraz. 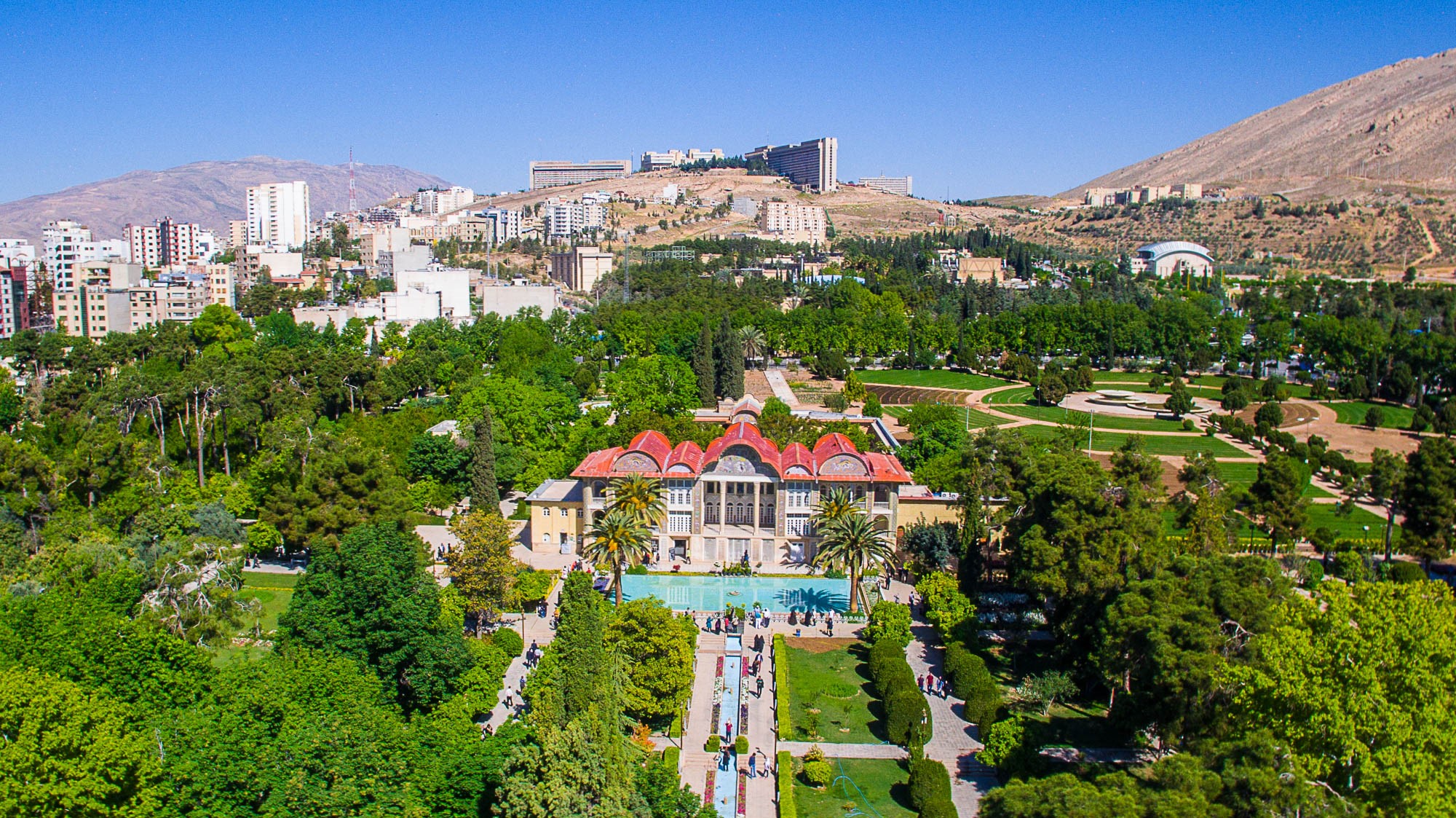 This garden is also famous for its beautiful flowers. In the recent ten years, the gardeners have planted different types of flowers in this Garden. One of the most beautiful flowers in Eram garden is the rose flower. The municipality of Shiraz made a rose garden with more than 250 varieties in northwest and west of the Garden.
You will find roses that are not exist in other parts of Iran and Asian countries. This garden is very famous among the Asian countries. In Asian countries, only two or three countries have such flowers with these varieties. Excluding beautiful roses, there are different types of other plants and flowers in this garden.